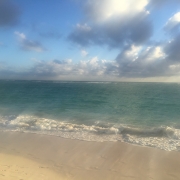 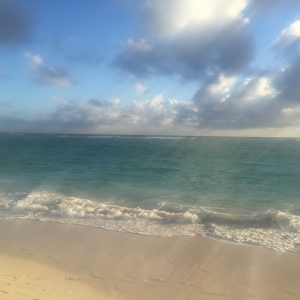 I’m a beach walker. Don’t know what that is?  Pretty much what it sounds like.  I love to walk on the beach and listen to the sounds of the ocean.  It’s my happy place.  It’s the place where some of my best (and craziest) ideas come from.  When my feet are in the sand, I also find my greatest sense of peace and feel a connection with myself that I don’t feel anywhere else. It’s also where I tend discover insights about myself when I I’m taking those steps.  So this morning, while vacationing and decompressing in the Mayan Riviera, I went for my morning beach walk.  The sun was just coming over the horizon, the blues of the ocean had traces of read and orange, and I was walking.  One foot in front of the other, my footsteps being erased by the next wash of waves as though I was never even there.  It was quiet, very few people are out at that time of the morning, most still battling their hangovers from the all inclusive furor of alcohol consumption and too much karaoke.  I typically tend to see a handful of people on these early morning quests, but this morning was especially quiet.  The tide was a little higher than it usually is, and every so often as I was walking along the shore, the waves would wash up over my feet.

Then it happened.  A little higher and stronger wave came up over my hand closest to the water.  The hand which was also carrying my sandals.  The wave receded back to the ocean, taking one of my sandals with it.  It was only one. The other remained firmly between my fingers.  But instinct took over and I went in after it.

Don’t ask my why.  It wasn’t a particularly sentimental sandal.  If it was lost, I’d have an excuse to go shoe shopping, which is never a bad thing.

But I went after it. Into the waves I went to recover it.  So, some added background here – I don’t swim.  I love the water.  I’m not afraid of it.  I’ve been waterskiing.  I’ve been snorkelling.  I’ve been jet skiing and flipped.  But I don’t swim. All of those preceding events I was safely ensconced in a life jacket.  This morning, I wasn’t.  So me chasing after my sandal made even less sense.

I splashed for a bit and managed to recover it, whilst not also losing the other, or my footing. A little wet, but relatively the same as before the sandal got away.  I then continued on with my walk along the shore, when it hit me.

What would have happened if that wave that grabbed the shoe right out of my had would have also pulled me under as I went to battle for it?  I can’t swim.  There was no living soul that I could see that would have rescued me.  I would have just been pulled into the ocean, sandals and all, with Steve sitting at breakfast, drinking his Mexican coffee, and wondering why I was taking so long.

So I thought about that. Who would I leave behind that would be affected?  How would they react?  What was the legacy that I would be leaving behind?  Would they say nice things in my eulogy – that I was a good person, that the world would be an emptier place without me?  Or would the only thing that was said was that at least she had nice shoes while she was alive?

So that’s pretty much what my brain was contemplating on the  remainder of my walk.  How did I want to be remembered  What did I want to leave behind?  What do I want people to say in my eulogy?

Give it some thought, because it certainly made me realize that some of this stuff in my life which I’m spending a lot of time and energy on, it’s just not worth it to me.

A change is coming.

And all from a walk on the beach and a random wave grabbing my shoe.

It did, however, reinforce for me though – I AM a beach walker.

We will be providing you with more information to help you Learn, Build and Manage your Firm in future posts, so stay tuned.